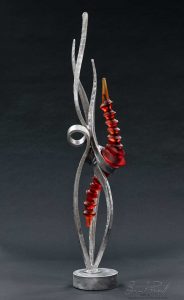 Brian is collected internationally.  His cast crystal is paired with forged iron for a unique and stunning piece.

You’ve worked hard to complete your embroidery, now it is time to showcase it! 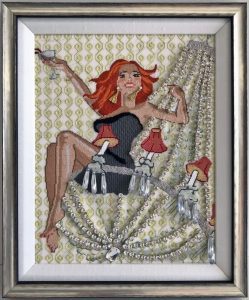 We are the Memphis experts for custom framing embroidery. We even have take embroidery and created trays – be creative.  We are the exclusive framer for all of Amy’s Golden Strand embroidery kits.

Come see us and let’s showcase your embroidery!

Join us Friday evening, May 3 from 5 – 8 p.m. for the opening of our exhibit by fiber artist Lisa Mergen. 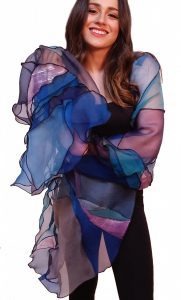 Meet the artist and see her latest styles in silk and linen scarves, jackets, and more.  Ideal for the spring/summer wedding season, parties, and Mother’s Day gifts.

This art gallery opening is part of Broad Avenue Arts First Fridays.  Art to wear in painted silks and linens will be available to purchase throughout May.

For more information on our Memphis art gallery, click here.

An Expression of Life
By Susan Nieman, reprinted with permission from Jewish Scene magazine

Jeannine Paul is an artist at heart. She loves to work with her hands and create colorful images that express her love of nature, the outdoors, places she’s visited and life itself. She remembers her father’s love of art and believes that love was passed on to her.

Born in Paris, France, Jeannine is a Holocaust survivor whose family was lost during World
War II. Alone in the world, she was sent and hidden at l’ecole de la Petite Republique in
Sevres, France, where she studied many forms of art from 1945 to 1947. The school served
as a refuge for Holocaust survivors and other orphans until they reached adulthood.
“We were very fortunate that this progressive school offered many art forms such as
watercolor, weaving, pottery and more,” said Jeannine.

Jeannine moved to the United States at the age of 17 and lived with family in New York.
She ultimately settled in Memphis when she became the wife of Dr. Raphael Paul, a
pediatric physician. “When we met, he did not know that I painted, and I did not know that he
was a sculpture,” she said.

The two took classes at Memphis College of Arts (MCA). Although Jeannine was still taking
classes in enameling and weaving, her love of painting evolved when she began studying
with Dorothy Sturm. “I worked with Dorothy and other MCA teachers for more than 20
years,” she said.

Painting became her first love. “I developed a style,” explained Jeannine, “but I can’t
quite say what that style is, because it is consistently changing.” Her art is not limited
to walls; enamels and paintings are found throughout her home, on furniture and
enameled floor coverings. Jeannine’s paintings are inspired by her
extensive travels. She paints mostly impressionist and expressionist landscapes in
oil on canvas, water colors and collages. She has won numerous awards in juried exhibits
collections throughout the United States and Europe. If you haven’t had the occasion
to view Jeannine’s work, you’re in luck. Although she will take appointments for clients in her
home studio, her art will be on display at T Clifton Art Gallery
on Broad Avenue in Memphis from March 1-30.

“Jeannine came to the gallery and introduced herself early 2018,” said T Clifton co-owner
Pat Brown. “Tom (Clifton) and I really appreciated her skill and bold use of color. Unfortunately
during 2018, we didn’t have an opportunity to exhibit her work. Fortunately for us,
Jeannine is tenacious. We reconnected during Israel Festival in November and began
to figure out how best to bring her work to the gallery. Each month during 2019, the gallery
will feature a local artist in conjunction with Broad Avenue’s First Fridays. We are
thrilled Jeannine’s schedule worked out for her to be our March featured artist.

“Jeannine’s work is an exceptional complement to our gallery’s offerings,” said Pat. “She takes
landscape scenes and makes them her own. Her brilliant use of rich,
strong colors is a reflection of her. Thus, the paintings feel authentic and
unique. Plus, we are excited to pair some of her paintings with our fine
art glass. Her exhibit will be a feast for the eyes and the soul. I feel the
paintings will draw the viewer into a world of joy and love. Isn’t that what
we all long for.”

Born in Paris, France, Jeannine is a Holocaust survivor whose family was lost during World War II. Alone in the world, she was sent and hidden at l’ecole de la Petite Republique in Sevres, France, where she studied many forms of art from 1945 to 1947. The school served as a refuge for Holocaust survivors and other orphans until they reached adulthood. (Jewish Scene Magazine)

Have you heard of the 52 week challenge that international jewelry designers participated in during 2018? 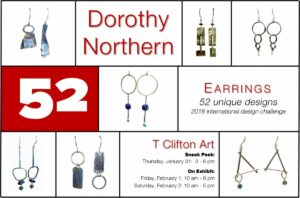 Please join us Saturday, December 1 from 5 – 7 pm as we showcase recent works by Brian Russell, 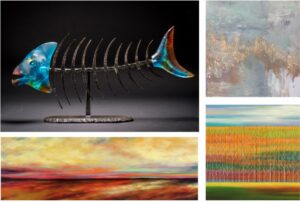 Memphis Brooks Museum comes to our Memphis Art Gallery with a Carroll Cloar painting.  Brooks Outside is a part of the internationally acclaimed Outings Project, a movement launched by French artist Julien de Casabianca.  Julien is dubbed the “Robin Hood of Street Art.” His paper murals have been installed in more than 50 cities around the world – from Hanoi to Moscow, and Mumbai to Los Angeles.  And, now at T Clifton Art in the Broad Avenue Arts District.

Brooks Museum states – “With Outings Project, de Casabianca takes images of “characters” from pieces in a museum’s collection, reprints them, and places them on city streets, giving communities new opportunities to discover, actively watch, and participate in the process. De Casabianca is working in Memphis through the end of September.” 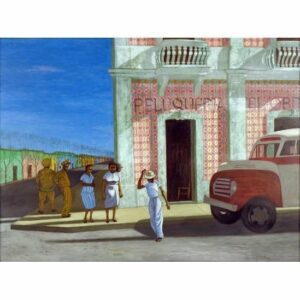 Do you want to refresh your home for the holidays?  Come see us – your go to place for custom framing and contemporary art in Memphis. 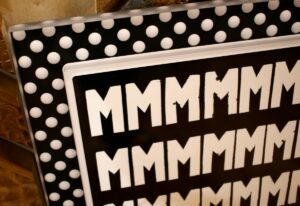 At our Memphis Art Gallery, our custom picture framing options are exhaustive.  You will find the largest selection of custom mouldings available – the best in Memphis! Custom framing Memphis for 37 years. Pictured is a Prisma acrylic moulding custom designed by the owner of Talbot Heirs hotel in Memphis.

Refresh your bathrooms with custom mirrors that reflect your style.  Add sparkle with fine art glass, contemporary paintings, and art to wear (jewelry and scarves).

Custom Mirrors are an ideal way to add style to your home.  With the largest selection of custom moulding available in Memphis, we offer you choice and design.  Let’s chat! 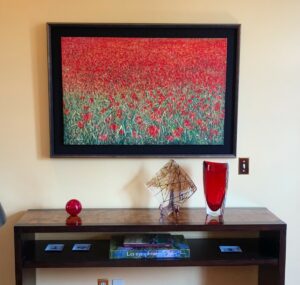 The client brought this painting of poppies back from a trip to Paris.

We recommended Larson-Juhl’s Eiffel collection for the moulding to custom frame the painting. 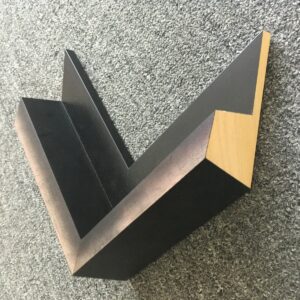 WE LOOK FORWARD TO WORKING WITH YOU

Sign up for our newsletter to get gallery news, events, and tips delivered to your inbox.